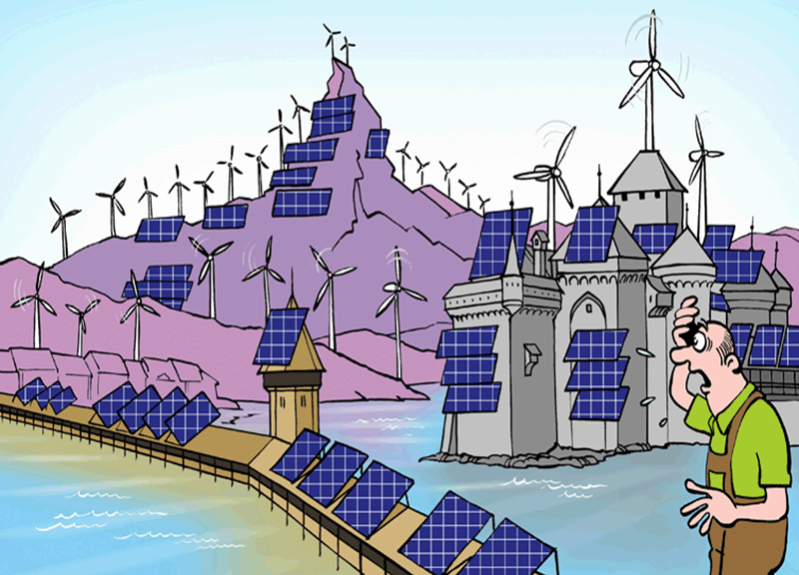 EMPA is a Swiss official institution originally dedicated to material testing. Over its almost 140 years of existence, it evolved to become a „world-r…

EMPA is a Swiss official institution originally dedicated to material testing. Over its almost 140 years of existence, it evolved to become a „world-renowned research institute for materials science and technology“. Recently, a study was published in the journal Energies under the title „Impacts of an Increased Substitution of Fossil Energy Carriers with Electricity-Based Technologies on the Swiss Electricity System“ (DOI: 10.3390/en12122399).

CCN issued last year its monograph „Versorgungssicherheit. Vom politischen Kurzschluss zum Black-out“ and feels sorry to see its conclusions confirmed by this study because, indeed, nobody can feel glad to see his country on its way to a dead end.

This is an excellent study in the sense that it makes valid „back of the envelope“ approximations around the future demand for electrical power in a country that is already intensely electrified, the mix of which was made in 2018 by 55.4% of hydropower, 36.1% nuclear, 1.7% thermal, and 4.0% so-called renewables (solar PV, wind, wood, biogas).

Assumptions are made that, to comply with the energy strategy 2050, an additional demand will arise for substituting 75% of the fossil-based house heating and hot water production, diminished by 42% due to improved insulations of old and new buildings, and by penetrating 20% of the automobile market with battery powered electrical vehicles. Thus, the current annual demand of 60 TWh (actually 63.4 TWh in 2018) will need to increase by 23 %, or 13,7 TWh, of which 10 TWh will be used for heat pumps and 3.7 TWh for electrical vehicles. To add to this challenge, the current 24.4 TWh nuclear supply must, one day, be replaced by something else. Even more important: the study identifies an additional maximum power requirement of 5.9 GWh/h (needed instantaneous availability). This corresponds to the equivalent of approx. 6 additional Gösgen nuclear power plants.

Much considerations are given to various scenarios around the consequences for the Swiss carbon footprint. These calculations are rather useless since everybody knows that, whatever the scenario for future power-mixes, the current emissions are minimal and can only get significantly higher. The purpose of a power supply system is to get power, not to fiddle with CO2. With regards to the intermittency and seasonal inadequacies of the production of so-called renewables, considerations are given to the limited additional possibilities of adding pump-storage capacities.

From all of this, it follows that an enormous supply shortage, long term as well as instantaneous, should be covered by other sources, in particular by imports although our neighbouring countries will face similar challenges. To remain politically correct, the EMPA does not conclude explicitly that the majority of the supply shortage and the requirement for the instantaneous availability of additional power generation will have to be covered by new gas-fired power plants.

Hopefully, this study will help providing light to the current political black-out arising from the ill-fated energy strategy 2050. And let’s hope too that EMPA will not be castigated for telling the truth.